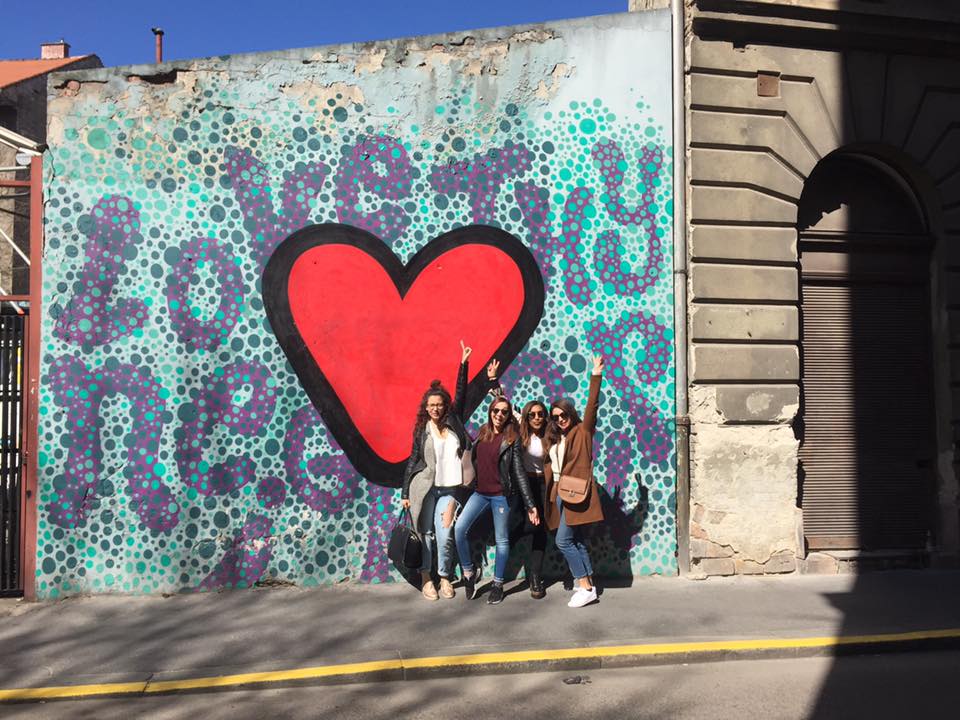 It’s been been way too long since I’ve written a post – shame on me! Actually, I think I’ve had a valid excuse with my full-time job and school, right?

Anyway, I’ve met three wonderful girls in my class and we became friends pretty quickly. Guess all that suffering together bonded us 🙂 Around December, the four of us planned on studying  together for our exams. Before that, we had brunch at one of my favorite brunch places here in Brussels, Peck47. Right there and then, among our poached eggs with Hollandaise sauce, we decided we were going on a citytrip together! Destination: Budapest.

We looked for a relatively cheap destination and not too far from Brussels, so Budapest quickly came to our minds. I think we paid about 100euros (can’t remember exactly) for our flight with Brussels Airline.

The hostel, which is known to be Budapest’s party hostel, is being run by a bunch of awesome Australian guys. Honestly, I was super happy I brought my own pillow because the hygiene in the hostel was a small disaster. But what do you expect for less than 20 euros a night… But besides that we had an awesome time there!

After we unpacked, we were starved so we headed back out. We went to Karavan, which is located in the Jewish Quarter, and serves very tasty street food! It is also located right next to Simple Kert, Budapest’s most famous ruin bar. Ruin bars are abandoned buildings, transformed into bars with each one having a unique character. Definitely have a drink at one of these ruin bars while you’re here!

Next up was the Liberty Statue. Tip: make sure you wear sneakers when visiting this statue, it’s located on the Gellért Hill! The statue is a memorial for everyone who has lost their lives as a sacrifice for the independence, freedom and prosperity for Hungary.
We were knackered, so went back to our hostel for a much needed nap. Later that evening we went on the pub crawl our hostel had organized. It’s a great way to get to see all the popular ruin bars and get to meet people from all over the world at the same time.

The next morning we wanted to go to this place called Szimply to have breakfast. It’s another super cute place, tucked away but it was completely full. Waiting time: one hour. So if you’re hungry, come early or don’t bother coming at all. So instead we went to Cirkusz, which was not that great to be honest. However, it was also very crowded and we had to wait half an hour. So we ended up having a coffee and cake next to Cirkusz, at Vintage Garden. The place has amazing cookies!!

The Saint Stephen’s Basilica, named after the first King of Hungary, was next on our list. It’s really worth the 2 or 3 euros you pay to go all the way up and have an amazing view of the city! Fun fact: did you know that St. Stephen’s mummified hand is being kept as a relic inside the basilica?

After the Basilica, we walked along the Donau river. We stopped at Shoes on the Danube Bank, which is a memorial for the many people who lost their lives during World War ll. As touching as the memorial is, you could really feel the city’s history there and then…

The Budapest Parliament must be one of the most beautiful buildings I have ever seen. It is enormous and its gothic style is just impressive.

Time to refuel! We went to the New York café, which is supposed to be one of the most beautiful café’s in the world. And it truly is beautiful. Although it’s called the ‘New York café’, the minute you step inside you feel like you’re in Paris. And don’t be intimidated: the place looks très chic but the prices are very affordable (as almost anywhere else in Budapest for that matter).

If there is one thing you must do when you’re in Budapest, it’s visiting one of the thermal baths. We chose to go rather late on Saturday evening to avoid the crowds, which turned out to be a great idea. The baths are warm and it can be a little smelly, so you don’t want it to be super crowded on top of that 🙂 We ended to going to the Gellért Thermal Bath. We were really lucky that the outside thermal bath was open, because it had already gotten dark and we had an amazing view of the Budapest Chain Bridge.
That evening we were ready for a big party! We ended up at an amazing ruin pub, very big with all kids of music and danced till dawn …

The next morning was a little tougher to get up. But since we had to catch our flight back at 4pm, we couldn’t afford to sleep in! So off we went, after a couple hours of sleep, on our way to Fisherman’s Bastion. This is another must-see!
But first: donut’s! We found The Donut Library by coincidence, but they have delicious donuts! Tip: surprisingly there are many places in Budapest where you can only pay by cash, just like this one. So be sure to always have to forint (the Hungarian currency) with you.
The Fisherman’s Bastion has 7 towers, which again give you an amazing view. It’s located on the Castle hill, next to the Matthias Church.

Time to leave! Knacked, but grateful to have explored this beautiful city, we returned to our hostel and left to the airport.